The City of Point Blank became Incorporated in 1975 when the Community voted for recognition and filed for the establishment of the city. The origin of Point Blank dates to the 1840’s when several families from the southern United States settled the area after Texas won its independence from Mexico.

The town’s unusual name has long intrigued visitors. Some believe it originated with gunfighters who tended to shoot their foes at close range; others attribute it to the bluntness of the early settlers’ disposition; but it actually got its name from Florence Dissesway, a French governess and relative of the Colonel R. J. Robinson family, who came to San Jacinto in the 1840’s. She called the settlement “Point Blanc” (white point). The name appealed to the community’s residents but they tended to “Texanize” the French term and mispronounce and misspell “Blanc” as “Blank.” When a post office opened in 1884, the local spelling was used.

Point Blank’s most famous resident was probably George T. Wood, who served as Texas’ second governor 1847-49. As Governor of Texas, Wood is credited with starting the state library in Texas, the establishment of public schools, and the penitentiary system in Huntsville. Wood, a native Georgian who fought with Sam Houston in the Creek Indian Wars, owned a large plantation in San Jacinto County, then part of Liberty County, and reared his family at Point Blank. He described the area as “a primeval forest abounding in wild game.” When he died in 1858, his wife ordered the body interred in a small family hillside cemetery on the plantation. A State historical marker about Gov. Wood was placed near the entrance to the cemetery in 1970 on the present-day property of the Point Blank Community Church, who still maintains the family cemetery.

Today, Point Blank remains a small community on the northwest shores of Lake Livingston. Fishing, sailing, bird watching, and other water sports and recreational activities are very important to us. As in Governor Wood’s day, the area is heavily wooded and borders near the Sam Houston National Forest with hiking and biking trails. Some ranching is in our community. Our local neighborhoods are made up mostly of retirees, weekenders and working commuters. 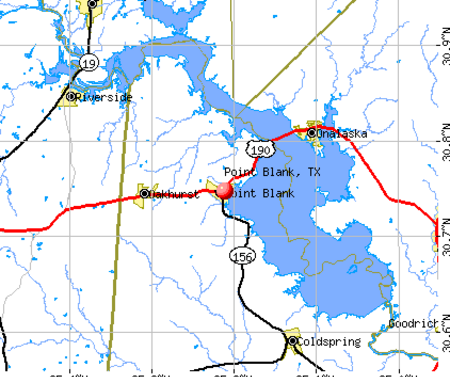